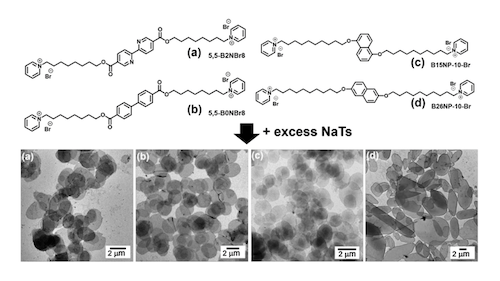 Self-assembly of cationic bolaamphiphiles is usually reported to form one-dimensional (1D) or zero-dimensional (0D), rather than two-dimensional (2D) structures. Here we have found a facile counterion-directed structure switch for such amphiphilic moieties. 0D/1D structures formed by self-assembly of cationic bolaamphiphiles can be converted into 2D planar structures by a simple counterion change to tosylate. As indicated by the single crystal structure and variable-temperature NMR studies, the strong binding between tosylate counterions and cationic headgroups drives the formation of 2D planar structures. It is highly anticipated that this approach may present as a simple methodology to control the stacking of the embedded conjugated cores in bolaamphiphiles, therefore modulating optoelectronic properties and function in such assemblies.